Keep updated with the latest in data science.

How To... | Using Displayr | Visualizations

12 Visualizations to Show a Single Number

Infographics, dashboards, and reports often need to highlight or visualize a single number. But how do you highlight a single number so that it has an impact and looks good? It can be a big challenge to make a lonely, single number look great. In this post, I show 12 different ways of representing a single number. Most of these visualizations have been created automatically using R.

When to create a visualization to represent a single number

There are a number of situations in which it can be advantageous to create a visualization to represent a single number:

Sometimes the plain text is the best option. Make fonts big and simple so they stand out.

Colors, bolding, emphasis, and other formatting options can be used to draw attention to figures and to communicate additional information. For example, the red font could draw attention to low results. Example: Sales declined by 23%.

You can do this in a sentence or in a visualization, such as in the bar chart below, where color is used to encode statistical testing results.

Create Your Own Bar Chart!

And you could also use informative formatting via a colored background for numbers, as in the visual confection below. In this instance, traffic-light coloring indicates the relative levels of performance of different departments in a supermarket.

Proportions are often illustrated using pie charts with varying degrees of success. They can be particularly elegant for displaying single numbers that are proportions.

Similarly with donut charts. It's just a matter of taste.

Create Your Own Donut Chart!

Option 5: Portion of an image

The two-category pie chart and donut chart are special cases of a more general strategy, which is to show a portion of an image.

A twist on showing a portion of an image is to proportionally color an image.

A common, but misleading, criticism of overlaid image visualizations and all the pictograph type of visualizations is that they are imprecise at best, and innumerate at worst. The three visualizations above have all been created to illustrate this point. The one on the left is not too bad. The President Trump approval visualization can readily be criticized in that the actual area shaded in blue is less than 37%. This is due to the greater amount of whitespace over the shoulders. Particularly problematic is the age visualization. This implicitly compares a number, 37, against some unknown and silly benchmark implied by the top of the image.

Furthermore, there are many contexts in which precision is not even important. How often is half a glass of wine actually precisely half a glass?

This data is from a study by the Pew Research Center. Go to the original report for a better visualization, which uses a thermometer.

This photo, from The Guardian, shows 888,246 ceramic red poppies installed around the Tower of London. Each poppy represents a British or Colonial serviceman killed in World War I. It is the same basic idea as the uncountable pictograph but on a much grander scale. 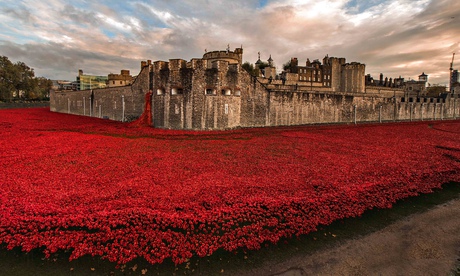 And finally the most common of all approaches in marketing reporting is to find an image or images that in some way represent, or evoke, something relevant to the number.

Create your own visualizations

Google's gauge inspired the gauge in this post. I haven't been able to find any copyright information for the beautiful Coca-cola photo. So, if you know where it is from, please tell me!